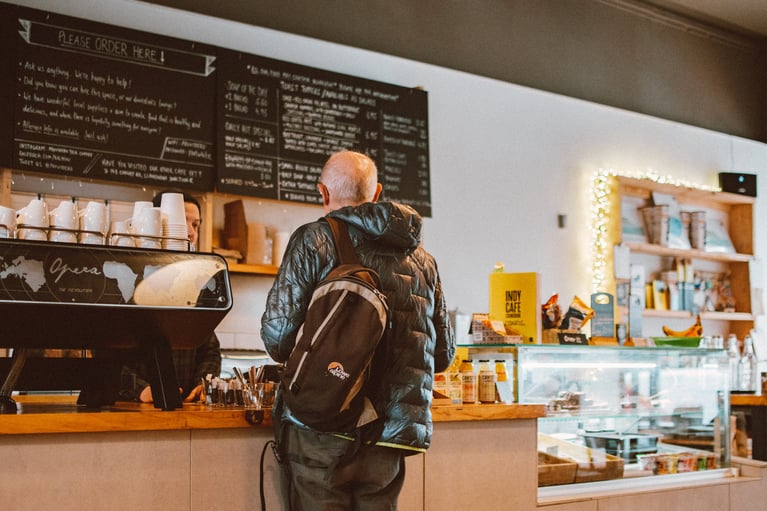 Consumer Psychology in the Time of COVID-19

Key Highlights as of March 20th

From worldwide lockdowns to government interventions and mandated work from home policies, the Coronavirus, or COVID-19, has impacted nearly every person on the globe.

At home in the U.S., debates rage from state to state and with the Federal government on how to best address the needs of public health, the economy, and the consumer.

The current situation has been compared to the 2008-2009 financial crisis, and while experts can’t yet tell the full scale of the impacts of this current crisis, one thing is already certain: main street and the everyday consumer has already been significantly affected.

Because consumer research and understanding the ever-changing sentiments and behaviors of consumers is even more important now, SightX set out to find out just how consumers were faring and how businesses can best respond during these challenging times. In our study, we received responses from 510 U.S. based consumers, representative of the U.S. general population. Insights presented here are reflective of the U.S. market from March 18th to the 20th.

Unease is settling over consumers quicker in this current situation because it has touched all aspects of the economy at the onset, not just financial institutions.

And, in that context…

How will consumers respond?

In uncertain times, businesses and consumers alike will adapt their behavior in a variety of ways. Unfortunately, some recent behavioral changes have been mandated with top down ripple effects already being felt across almost all industries.

Because consumer sentiment in these times is changing, almost daily, our aim was to get at expectations of spending on different consumer categories two to four weeks out. We found that 69% of consumers were “actively planning on reducing personal spending” in general, in the immediate future. 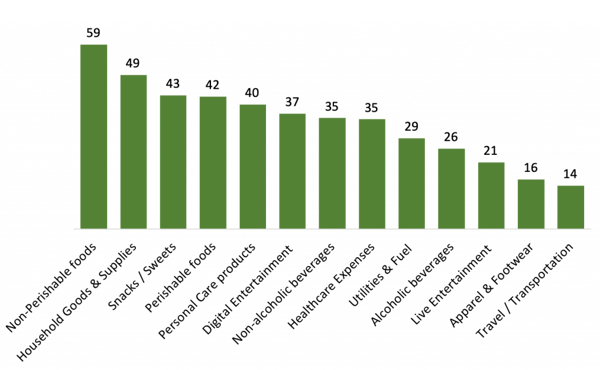 We followed up by examining group differences in consumer behavior, including gender, income level and age groups.

Respondents aged 18 to 54 years old expressed more of a tendency to change spending habits, either an increase or decrease across categories, versus respondents who were 55 years old and above.

Where we are and where we’re going

Consumer confidence, to a large degree informs economic planning and activity. So we asked consumers about their assessment of the general conditions of business and employment in the U.S., now and 6 months hence.

The good news is that consumers generally expect the business conditions in the U.S. to improve in 6 months with only 43% (-9%).

So, what does drive behavior?

In addition to behavioral conditions, we examined several general psychological mindsets and world views that consumers have, to include self-agency, optimism, trusting that governments and states take care of their citizens, importance of luck in ones’ life, the goodness of humanity, and its rationality.

This was done with the goal of analyzing potential psychological drivers of consumer behavior.

The two most powerful insights uncovered were related to two variables: a person’s sense of self-agency (does luck dictate my life or not?), and ones’ trust that the government (federal and/or state) will take care of their citizens.

With the question of “I trust that the government (federal and/or state) will take care of me,” measured with a 5-point scale, top and bottom buckets were determined and compared on likelihood of increase in spending across each consumer category. 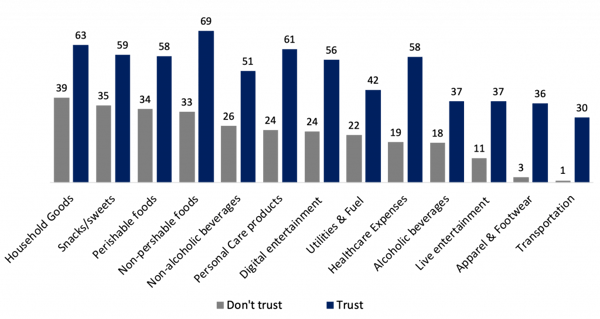 Those who “trust that the government will take care of” them are up to 38% more likely to increase spending across all consumer categories.

With the question of “In general, I think one’s life trajectory is about luck,” also measured with a 5-point scale, top and bottom buckets were determined and compared on likelihood of increase in spending across each consumer category.

Those who had lower sense of agency, they think luck plays a big role in their lives, were significantly more likely to increase their spending, versus those who had higher self-agency (as opposed to random luck), who were more likely to buckle down on spending. 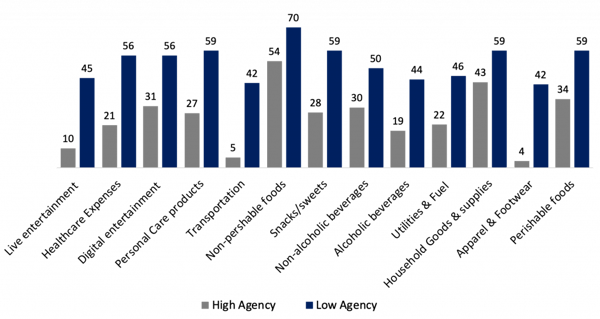 Those two psychological variables were the most powerful predictors of who is more likely to alter spending habits, much more so than any other demographic or control variable, including gender, income, or age group.

This preliminary study suggests that some of the strongest indicators of consumer behavior in this particularly challenging COVID-19 environment are actually driven by consumer psychology and mindset rather than a specific consumer demographic.

I Pity The Fool: Correlations, Predictions, and Causations

Enhancing the Consumer Experience with the Power of Green Consumption