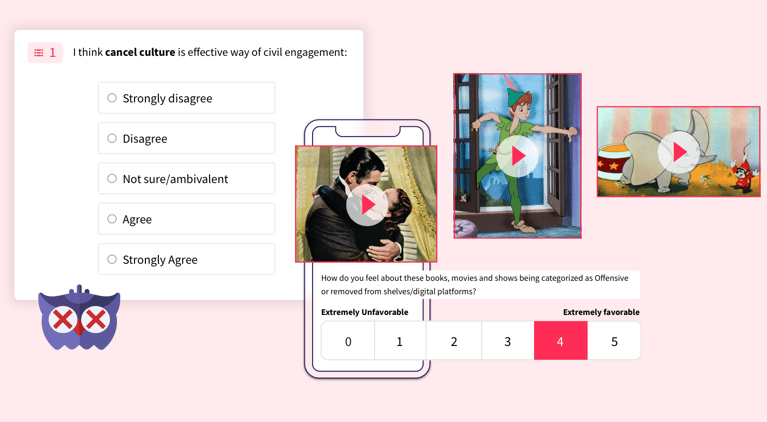 Avoiding transgressors is hardwired into the human brain. Since early groups of people began to form communities, turning away from those who caused harm has been used as an effective form of societal punishment.

Today it is widely know as cancel culture. And within the last 3-5 years it has been the subject of many heated discussions.

So we decided to dive headfirst into the debate and put our cancel culture assumptions to the test. In our study, we set out to:

By definition, cancel culture is the public withdrawal of support and vocal criticism of a person, company, or entity; usually, after they have done or said something considered objectionable. And while it may feel like just the latest addition to a particularly contentious political landscape, it isn’t exactly a new phenomenon.

In ancient Greece, a similar practice was known as ostracism. And it involved sending an individual into exile for a decade based on the results of a popular vote. In fact, in Politics Aristotle stated that ostracism was instituted as a public failsafe, allowing common people to check the power of political figures. However, he also made sure to note that it wasn't always applied fairly or intelligently.

In more recent history, it began as an online “call-out” culture and served to highlight the harmful actions of public figures in hopes of educating a wider audience. But, over time, it evolved into something much more drastic.

And while there is much (much, much, much) more that we could say about the history and current state of cancel culture, we will end our truncated history lesson here and dive into what we found. (However, if you're interested in learning more about the roots of cancel culture, check out this piece from Vox News)

At the risk of pointing out the blatantly obvious, people are very divided on this topic.

Much like anything these days, we found that a person's political affiliation is a strong predictor of where they fall on the support-to-opposition spectrum surrounding cancel culture. However, that is only one small piece of a larger story.

Using the automated segmentation tools in the SightX platform, we discovered that there were three distinct personas at play; those who saw cancel culture in a positive light, those who saw it negatively, and those who were still unsure.

While this wasn’t necessarily a surprise, the common traits and beliefs each group shared were.

Those who saw cancel culture as a positive and productive way to express their beliefs were the minority (24%). After investigating their demographics, we found that they were mostly millennials (66%) between the ages of 25 and 44. They were also the most diverse of the three groups, with a varied blend of ethnicities represented. They were the most educated, with 62% of the respondents in this group holding at least a 4-year degree, and in the highest income bracket, with nearly 40% having a household income of at least $100,000.

When it came to their beliefs, we quickly saw a divergence from the expected. While this group was the most likely to have participated in cancel culture, they were also the most likely to fully believe a “canceled” person or entity could redeem themselves and make a comeback- if done correctly.

Generally, they seemed to be looking for canceled people or brands to take a step back once called out, and reconsider their offending action. Apologizing, educating themselves, shifting their mindset, and working to help those they may have harmed were all mentioned as crucial steps that could be taken towards redemption. Which would explain why they were also the most likely (70%) to support the creation of a “forgiveness culture”.

The respondents who saw cancel culture as a harmful addition to our society were a slightly larger group (31%). Digging into their demographics, we found that they were most often baby boomers (54%), ages 55 and up. The majority were Caucasian (74%) and most had at least attended some college, if not received a degree.

When it came to redemption, they were the most likely to be unsure or disagree (70%) that a canceled entity could work its way back into public favor. This points to a major disconnect from those who seem to perpetrate cancel culture, who readily believe in the possibility of forgiveness.

We also explored their feelings on recently canceled/altered products, sports teams, and media. Out of all of the changes made, we found that the (temporary) removal and subsequent pre-film warning added to Gone with the Wind was one of the most upsetting for this group. While they weren't particularly pleased with the Pearl Milling Company's re-brand or the removal of certain Dr. Seuss books, it seems that Gone with the Wind struck a cord that distressed many of these respondents.

Both of these findings point to the fact that fear and nostalgia may play a larger role in this group's opposition to cancel culture than we believed.

Stuck in the Middle

While we dove into the extremes during our analysis, it’s crucial to remember that a large number (45%) of respondents ended up somewhere in the middle. Just like many of us, the people we surveyed were not quite sure whether cancel culture is healthy, helpful, or even informative.

With the uncertainty and fear surrounding this topic, it's easy to lose sight of the underlying fact that each side is just trying to do what they believe is best for society.  As is often the case with emotionally-charged topics, open dialogues that lead with empathy and seek to understand a differing view point will likely lead to improved outcomes for us all.

Is Customer Loyalty Dead or Are You Doing It Wrong?

Insights & Innovation: The Importance of Empathy in Reaching Consumers