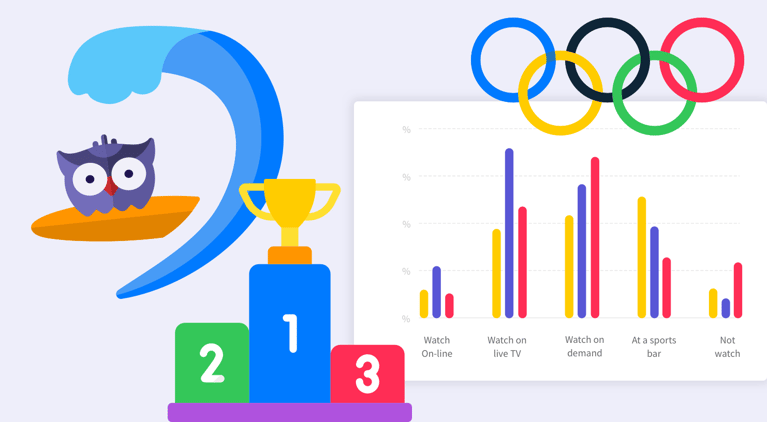 After a long wait, the 2020 Tokyo Olympics have (finally) arrived!

And if you’re anything like the SightX team, then we have no doubt you’re excited to catch this year's games.

Maybe it's the amazing feats of athleticism that keep us watching. Or perhaps it's the zero-to-hero stories we watch play out right before our eyes.

Whatever it may be, it captivates us every two years. So our team decided to dig a little deeper.

In our latest study, we engaged with US respondents to better understand why they love the Olympics, and how they plan on watching the 2020 games.

Here is what we found:

As we are known to do, we decided to take our analysis a step further to see if there were any generational differences when it came to Olympic viewing.

But interestingly enough, we found that while our ages may differ, our Olympic preferences are quite similar.

Baby boomer, Gen X, and Millennial respondents all had similar levels of passion and excitement for this year's games. And they even all seemed to agree on the reason: they love cheering on team USA.

But (as usual) Gen Z respondents did have some notable differences.

Between 29%-35% of respondents from older generations planned to watch the opening ceremonies and as much coverage as possible afterward. But, for our younger respondents, that number was just below 6%.

The majority of our Gen Z respondents made it very clear: they won’t go out of their way to watch the games, but if it’s on and it’s a sport they enjoy, they might watch.

Similarly, their top reason for watching the Olympics was simply a love of competitive sports.

In case you missed it, the IOC approved five (well, technically six) new sports for this year's games. Some of these sports- surfing, skateboarding, karate, and sport climbing- will be making their Olympic debut in Tokyo. While baseball/softball will be returning after a brief hiatus.

With the inclusion of these new sports, we wanted to know what people were most excited to watch.

To our surprise, we found that the overwhelming majority of respondents were looking forward to watching surfing above all. And unsurprisingly, baseball wasn’t far behind- it looks like fans are ready for the game to make its Olympic return.

Unfortunately, skateboarding and sport climbing saw little-to-no love, as both were firmly planted at the bottom of our list. But we have a feeling that might change once people get the chance to give them a try.

4 Things that Will Defy Your Perceptions of Gen Z